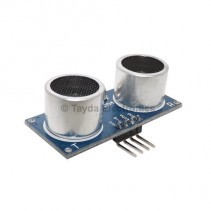 The HC-SR04 is Ultra...SONIC! The HC-SR04 Ultrasonic Range Finder uses ultrasound to find the distance to anything that is in front of it. 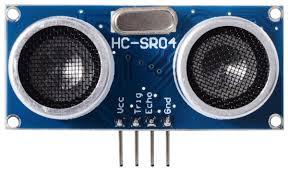 Many animals use Ultrasound to detect things around them. They sense the range around them and are able to locate bugs, animals, or other 3D objects. Ultrasound is the way that Bats echolocate.

In the realm of robotics, the robot must be able to sense the world around it. The HC-SR04 enables a robot to do this. This is a single point distance sensor in that it can only tell you about a single point around it at a single point in time. The robot must either sweep the area in front of it or use multiple sensors to gather information about anything in front of it. This would provide one point in a point cloud collection. So it is not the most robust sensor but it is extremely easy to use and accurate.

One nice thing about the HC-SR04 is that unlike Infared Range Finders it is not susceptible to black areas or to sunlight. It is accurate in a wide variety of applications.

There are four pins on this HC-SR04, the pins in order are 5V, Trigger Input, Echo Pulse Output, and Ground. The sensor needs 5V and ground all the time. But for use, you set the Echo Pulse Output to high and then low to pulse the ultrasonic wave and then read the trigger input line. It is fairly easy to use and there is a robust Arduino library built for the operation and use of the HC-SR04 called NewPing.

Other uses of the HC-SR04 are depth sensors, distance sensors, cliff sensors, or anything else where you need to sense the distance between two objects in space. I have personally used the HC-SR04 on robots and door sensors. They are small inexpensive and extremely useful!

The HC-SR04 is compatible and easy to work with using an Arduino of any type, a Raspberry Pi, or just about any other microcontroller or SoC that is available. Also if you are way into Robotics there is a ROS driver available for the HC-SR04 to publish data in ROS.

Work on an instructions set at TaydaKits and let us know what you made below!

The HC-SR04 can be found at Tayda Electronics here.